'We're all doomed' vs 'Project Fear'

The dynamics of Brexit are a fascinating goldmine for anyone interested in human behaviour and how our opinions and fears are shaped and reinforced.

Last week I listened to Mark Carney, Governor of the Bank of England, on the BBC Today programme on Radio 4 explaining how a set of scenarios have been created for the UK economy (available here from 2 hours 10 minutes in). These scenarios set out the potential impact on the economy from various ways in which the UK could move forward. This is prudent – countries and businesses should consider scenarios and prepare accordingly. All very reasonable.

However, anyone who has seen the headlines will see a great example of the difference that can arise between what is said and what we hear… This can be characterised by the two polar-opposite reactions to the worst-case scenario only; 1) a sentiment that ‘we’re all doomed’ or 2) a labelling of ‘project fear’.

These reactions align with and further cement existing beliefs. 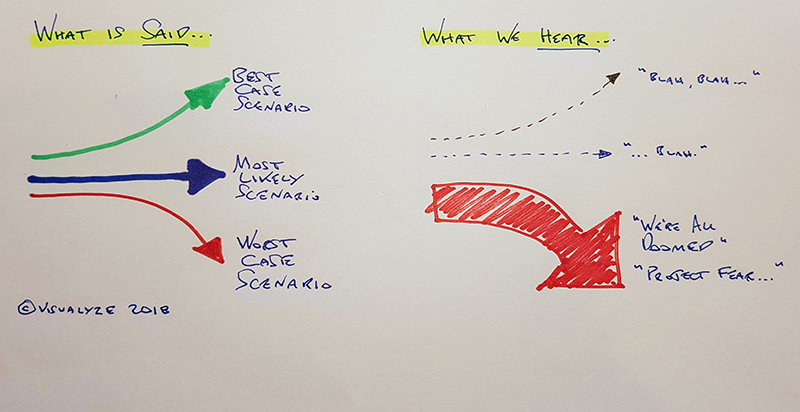 Students of behavioural science will recognise many cognitive biases in play as we consider the differences between what is said (objective) and what is heard (subjective and highly contextual).

There’s lots of fancy psycho-language that could be used at this point. However, at the most fundamental level, I suggest that what is going on relates to basic Darwinian mechanisms. We are programmed in our DNA to react to changes in the environment and our survival relies on us correctly identifying and responding to threats. All changes in the environment are first perceived as potential threats (including changes which may turn out to be opportunities). We then prioritise our focus on the most significant threats automatically through our fight, flight or freeze response.

So, when Mark Carney shares the Bank of England’s view of scenarios for Brexit – best case, worst case and most likely case – our tendency can be to ‘zone out’ all but the worst case and regard this as a prediction, rather than just one potential scenario. Ironically, the result of this automatic reaction can be to reinforce previously held beliefs on each side of the debate.

"We are programmed in our DNA to react to changes in the environment and our survival relies on us correctly identifying and responding to threats."

Perhaps the lesson here is that there is a massive difference in intent between hypothetical scenarios and stated predictions (or forecasts) – yet our still-evolving human brain tends to perceive them as the same thing, latching on to the most significant perceived threat and reacting to that. Even when we understand and recognise this, it is still almost impossible to suppress or rationalise our automatic emotional reactions.

I can only offer two pieces of advice: